I originally wrote this in response to seeing this quote by Thomas Merton posted in group I belong to. I had commented earlier, to effect, that five years wasn’t enough for me. I decided to elaborate in a later comment and what follows is that comment, edited slightly for context:

Thirty years ago I was 19 years old and in a very topsy turvy reality where everything I had “planned” was turned completely upside down, like being caught in a tornado. I didn’t know which way I was going, when I might touch the ground again (if ever), or if I’d even have the strength to put my feet under me again when that happened. It was in the darkest times though that I felt something stirring deep inside, like an ember slowly being coaxed to life with an occasional breath or a shaving of tinder. I had never felt this before but for some reason I found hope in it’s unexpected discovery. Well… OK, I had felt something like this once before, a decade earlier, but that’s for a different post 😉

A couple of years later I knew my first marriage was ending in divorce and I was busy learning to drive 18 wheelers (across the country), without killing myself or others. I saw the Aurora Borealis over the badlands of Montana, tornadoes in Iowa, supercells in Texas, blizzards in New Mexico and I watched the sun rise over the Atlantic and the sun set over the Pacific.  I watched maples drop their leaves in the fall and the first green sprouts of spring wheat and corn. I met people of nearly every faith, color, and circumstance; and I tried to learn from all of these things.

Those first few years exploring the highways was the added breath and tinder needed to help that tiny ember develop into something consistent.  I still wasn’t sure exactly what it was but it was there, and mostly reliably at this point.

Twenty years ago I kept that ember in a special place.  I knew now that it was a part of me, as much as my right hand or left leg were. I found strength in it but most importantly it teased me by never telling me it’s name.  It was a game I knew quite well by this time…  Look under a rock, in the lyrics of some song, in the flash of lightning during a storm. “Can you tell me my name?” 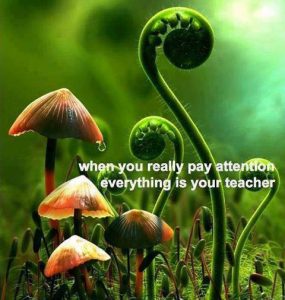 It put me in a perennial state of mind where I took nothing to be what it first seemed and I learned to question everything.  I learned to look everywhere.  I learned the “here and now” of Buddhism and the grace and wonder of Taoism, so I could be a better player of that game.  I read books of science, philosophy, and fiction; for a dream, even someone else’s dream, might hold the answer.  I learned to be a stalwart debater. I learned to play “the devil’s advocate.”

Ten years ago I was still trying on different ideologies like one might try on different pairs of shoes, to see which one fit best.  I self-identified as a pagan, wiccan, neo-pagan and even atheist for a short time in that period.  All, in their own way, fed that flame and provided a sort of hearth for it but none felt exactly right.  That’s when I really, REALLY started to consider pantheism.  Of course I also had to examine the philosophies presented by the deists, the panentheists, and the cosmodeism hypothesis of Mordechai Nessyahu, et al.  But the name game was complete without there ever being a clear winner.  And I was OK with that.

Five years ago I was already pretty established in where I wanted to be in life; physically and spiritually.  I would be pleased that I’ve somehow managed to maintain my goals. 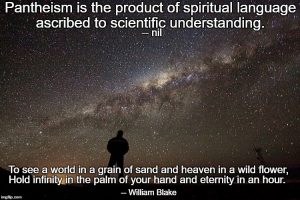 2 Responses to Finding my religion…