“My father believed in the God of Spinoza and Einstein, God not behind nature but as nature, equivalent to it.”  – Dorion Sagan (son of Carl Sagan)

Famous scientist and science communicator Carl Sagan was devout about the harmony of natural laws, similar to Albert Einstein and Baruch Spinoza. Like Einstein, he refused to be labeled an atheist and identified himself as agnostic. Pantheism is a fundamentally agnostic position and a relatively obscure and unknown term until recent times. Some scholars now identify Sagan as a pantheist. At minimum, Sagan demonstrated himself to be highly sympathetic to pantheistic beliefs as evidenced by his words.

In place of calling everything “God” in the way that word was used by Einstein and Spinoza, Sagan often used the phrase “Cosmos”,

“Cosmos is a Greek word for the order of the universe. It is, in a way, the opposite of Chaos. It implies the deep interconnectedness of all things. It conveys awe for the intricate and subtle way in which the universe is put together.”

Sagan emphasized that his belief in God was dependent on whether it was defined in a theistic or a pantheistic way,

“The idea that God is an oversized white male with a flowing beard, who sits in the sky and tallies the fall of every sparrow is ludicrous. But if by God, one means the set of physical laws that govern the universe, then clearly there is such a God.”

He directly mentions Einstein and Spinoza in similar remarks,

“Some people think God is an outsized, light-skinned male with a long white beard, sitting on a throne somewhere up there in the sky, busily tallying the fall of every sparrow. Others—for example Baruch Spinoza and Albert Einstein—considered God to be essentially the sum total of the physical laws which describe the universe. I do not know of any compelling evidence for anthropomorphic patriarchs controlling human destiny from some hidden celestial vantage point, but it would be madness to deny the existence of physical laws.”

Explaining why the personal god, who is prayed to and worshipped, has been more attractive than Einstein and Spinoza’s God, he explains,

“This God is emotionally unsatisfying…it does not make sense to pray to the law of gravity.”

Sagan suggested that accepting the pantheist definition of God should make everyone a believer of God,

“Now, it would be wholly foolish to deny the existence of laws of nature. And if that is what we are talking about when we say God, then no one can possibly be an atheist, or at least anyone who would profess atheism would have to give a coherent argument about why the laws of nature are inapplicable. I think he or she would be hard-pressed. So with this latter definition of God, we all believe in God.”

“An atheist is someone who is certain that God does not exist, someone who has compelling evidence against the existence of God. I know of no such compelling evidence. Because God can be relegated to remote times and places and to ultimate causes, we would have to know a great deal more about the universe than we do now to be sure that no such God exists. To be certain of the existence of God and to be certain of the nonexistence of God seem to me to be the confident extremes in a subject so riddled with doubt and uncertainty as to inspire very little confidence indeed.”

He further criticized the atheist label as being unhelpful and vain,

“If we are to discuss the idea of God and be restricted to rational arguments, then it is probably useful to know what we are talking about when we say “God.” This turns out not to be easy. The Romans called the Christians atheists. Why? Well, the Christians had a god of sorts, but it wasn’t a real god. They didn’t believe in the divinity of apotheosized emperors or Olympian gods. They had a peculiar, different kind of god. So it was very easy to call people who believed in a different kind of god atheists. And that general sense that an atheist is anybody who doesn’t believe exactly as I do prevails in our own time.”

Carl Sagan, like Spinoza and Einstein, went as far as to call his own feeling a “religious” one,

“…there is no deeper religious feeling than the feeling for the natural world. I wouldn’t separate the world of nature from the religious instinct…I would not even object to saying that the sense of awe before the grandeur of nature is itself a religious experience.”

He describes these feelings being expressed when looking up at the sky, as opposed to praying in a building,

“In every culture, the sky and the religious impulse are intertwined. I lie back in an open field and the sky surrounds me. I’m overpowered by its scale. It’s so vast and so far away that my own insignificance becomes palpable. But I don’t feel rejected by the sky. I’m a part of it, tiny, to be sure, but everything is tiny compared to that overwhelming immensity, And when I concentrate on the stars, the planets, and their motions, I have an irresistible sense of machinery, clockwork, elegant precision working on a scale that, however lofty our aspirations, dwarfs and humbles us.”

He imagined a future pantheistic “religion”,

“A religion old or new, that stressed the magnificence of the universe as revealed by modern science, might be able to draw forth reserves of reverence and awe hardly tapped by the conventional faiths. Sooner or later, such a religion will emerge.” 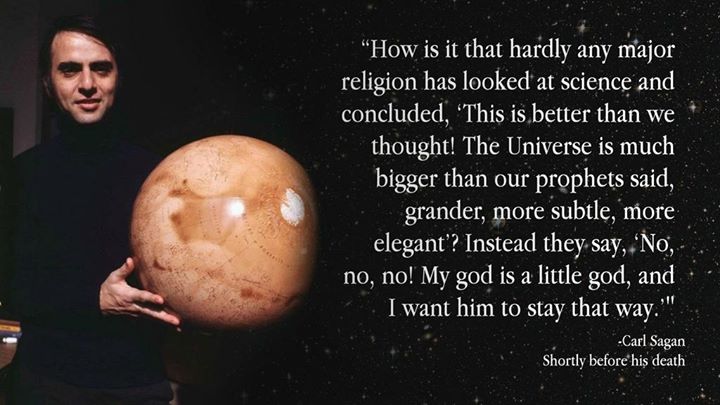