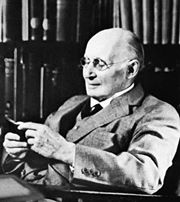 Alfred North Whitehead (1861 –1947) – well regarded mathematician and philosopher who developed “Process Philosophy”, the precursor to a developed form of panentheism called, “Process Theology”. Whitehead was so unsettled by the pantheistic implication of Albert Einstein’s theory of relativity, that he published a speculative theory to rival Einstein’s theory of relativity (which is now widely discredited).

Many people love to discuss the mysteries of life. But many also find themselves desperate for certainty outside of our limited human understandings. Physicist Albert Einstein did not sugar coat his feelings about this,

“The difference between stupidity and genius is that genius has its limits.”

Pantheistic thinkers have often emphasized respecting the limits of understanding. When Baruch Spinoza wrote his pantheist philosophy, for example, he defined his words carefully, as if writing a contract, in order not to become lost in abstract infinite mystery. Like a “panentheist”, he speculated about an infinite world. But his pantheism reigned, emphasizing that humans have limited access of understanding the infinite world. So while “panentheism” is a word that looks like pantheism, its attention is on something different. A strict panentheism tries to accept the fundamental pantheistic concept (All is God) and then – as theists do – ventures back beyond the limits of understanding searching for certainty about “God”. Of this attitude, philosopher Bertrand Russell once warned,

“The demand for certainty is one which is natural to man, but is nevertheless an intellectual vice.”

Theists insist on a personal god which can be reduced to a specific knowable understanding (He, Him, etc.), while pantheists find God to be a divine unity whose nature is mostly unknowable beyond our limits of scientific discovery. The attempt to combine these opposite ideas results in the pantheistic + theistic derivative, panentheism, meaning “All is in God”.

Ironically, the word “pantheism” was actually coined by a panentheist. Mathematician Joseph Raphson wanted to distinguish atheism with the underlying philosophies of the ancient Egyptians, Persians, Syrians, Assyrians, Jewish Kabbalists, Brahmin Indians, and most prominently, the philosophy of Spinoza. He was a slight critic of Spinoza and would today be labeled a panentheist because he insisted that divine infinite space was distinct from matter – an idea that would later be challenged by pantheist Albert Einstein’s theory of relativity, where Einstein hypothesized that,

“Time and space and gravitation have no separate existence from matter.”

The majority of academic work about pantheism has actually come from panentheists and theologians who have been uncomfortable with the philosophies of Spinoza, Einstein, Emerson, Bruno and other like-minded individuals. In discussing theology and spirituality, theologians are accustomed to focusing on what is ‘outside of reality as we know it’. Pantheism takes a radically different approach and is a focus on reality itself (i.e. nature). Critics assume that this focus means that pantheists simple-mindedly reject any and all possibilities ‘outside of reality as we know it’. They may have an egocentric view of pantheism, believing that pantheism is a direct rejection of their claim (like atheism) and must mean that God is limited in a certain way, just as they tend to limit the definition of God. This is not the case. Pantheists are usually unable to limit the definition of God or claim to know the immensity of what it actually means to be “all”, “infinite”, or “God” let alone distinguish these words. Some pantheists ignore panentheistic possibilities as speculation, but do not necessarily “reject” these possibilities. A strict panentheism, on the other hand, is certain and insist that God must be bigger than “everything”.

Pandeism is another derivative view, the combination of deism and pantheism, which insists that there must have been a creator for this pantheistic world. Both panentheism and pandeism search for a first cause of everything, a study known as teleology. The logic is often based on cause and effect – there must be a cause for this effect. The questions of ‘the cause of the cause’, and ‘the cause of the cause of the cause’, produces an infinite problem for this logic. But some pantheists view cause and effect as a unified event, leaving no definite distinction between creator and created. Other pantheists discount teleological speculation as unanswerable. When God is found to be here and now, everywhere and everything, the conversation about teleology, other worlds, etc. becomes unnecessary. What is ‘beyond’ nature and divine unity, if anything, is not a pantheist concern for at least two reasons:

In other words, if someone said that this divinely unified world might be ‘created’ (pandeism) or that God might be ‘bigger’ (panentheism), it doesn’t usually bother a pantheistic type as long as ‘creation’ is still the prime focus of divine language. Pantheists often have a “so what?” or “sure, maybe” attitude about teleological speculation because it ventures into a level of abstraction and guesswork without any evidence and without any need once you find in nature what you deeply desire. Pantheism is agnostic to other-worldly speculation. This, in turn, blurs the distinction between pantheism and agnostic versions of pandeism and panentheism. Some people are thus categorized as both pantheistic and panentheistic by observers. As for those who are certain of their views on God, psychologist Carl Jung said,

“I am sorry to say that everything people assert about God is nonsense, for no one can know God.  Knowing means seeing something in such a way that everyone can know it, and for me it is totally meaningless to profess a knowledge that only I possess.”

People who wish to limit the definition of God (theists, atheists, strict panentheists and strict pandeists…) tend to make a mistaken assumption that pantheists do the same, limiting God to the universe exactly as we know it. It is a rigid definition of pantheism to allow for a convenient argument against it, since there is obviously much we do not know. Yet, no pantheist philosopher, poet, mathematician or physicist has limited possibilities in that way. No notable pantheist claims to have a complete picture of what “everything” or “God” or “divinity” or “nature” or “all” or “beyond the universe” or “infinity” mean without exception. Pantheists simply apply divinity to everything and usually stay open to possibilities beyond our limits of understanding.

Pantheism never claims to have an ultimate answer to everything. Often that’s part of the point. It is a world view which finds divinity as the unity of natural laws and what we call “everything”. The search ‘beyond’ that goes beyond the pantheist perception. Pantheists do not necessarily reject panentheism, pandeism, and other creative ideas about “why” things are the way they are. If they ignore creative ideas about the “why” of life it might be because they are consumed by divinity all around us, here and now.