I have always admired C.S. Lewis with the respect due to a loyal opponent. He certainly wasn’t a mystic Christian, but he was no mindless fundamentalist. Although an apologist for a state religion I cannot condone or glorify, Lewis always wrote with a strong heart and intellect, and his arguments, though too boxy for my tastes, have helped create a significant minority population of what had become an endangered species: logically rigorous Protestants.

When this well-known quote was posted in the Pantheism Facebook group recently –“You don’t have a soul. You are a soul. You have a body.”– I was pleasantly surprised by the amount of support it received. We pantheists can be rapacious in our picking apart of anything that smacks of an Abrahamic religion, but we should be gentle with ideas about the soul, no matter what the source. It is far from the most egregious idea advanced by theism that we exist beyond these temporal manifestations, and in fact if there is one broad topic with which pantheists can agree without playing a lot of word games, that should be it.

But that last line, “You have a body,” is where Lewis’ Cartesian dualism is showing. If I come to believe that I am a soul that has a body, I am in danger of making that most grave error of the ages –giving immortal status to the fictional “ghost in the room,” my ego. When that happens, the religion that would be a remedy for the ego becomes a kind of intellectual cryogenic fluid to preserve it, and the scourge of self-centered fundamentalism is the result. 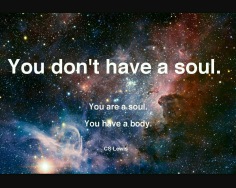 To deny the soul on these same terms and offer nothing else, however, might be worse, because it does nothing to address the ghost nor to explain the extrasensory perception that there is some form of continuity of self beyond the lines drawn by ego. When we lose that sense, we have the modern malady of “the ghost in the machine:” an ego that feels trapped in the body, believing itself to be isolated from its surroundings that are actually part of itself, yearning for a freedom it could have now except for the belief that it can only find it in death.

Pantheism can address this quandary by using its holistic principles to accept the intention of the soul-having or soul-being experience, while redefining what we mean by the concept. The pantheist soul is not something we are nor something we have –it is not a “something” at all. It is an action, what the universe does through us to keep us mindful of our true expansive nature.

To me, “soul” has always been one of those words that designates a function or activity rather than a thing, like “heartbeat” or “thought.”

Theism generally uses the word for an aspect of the self that survives the death of the body, and its function is to fuel the yearning for God while alive. It would be consistent with this usage, then, for a pantheist notion of soul as the natural self in its full eternal context, beyond its subjective experience of itself or an object of the analysis of others.

We are the timeless essence of Existence, expressing itself in time as you and me, him and her, this and that, giving each its own unique perspective of the Whole.  The experience of the soul –perhaps the verb “souling,” however clumsy for its newness, is the clearest way to convey it– is to be uniquely aware of the the universality of this expression. The work of the soul –again, souling– is to relieve you of the sense that you are a worker, to let you be nothing other than Being itself, just as a heartbeat is nothing other than the heart beating, and a thought is nothing other than the mind thinking.

The soul is in no way separate from the body, but it is the body in its holistic sense rather than the semantic “my body/her body/their bodies” and the inherent implied dualism. In this sense, it becomes much more clear that the body is an activity of the universe. In the famous words of Buckminster Fuller:

“I seem to be a verb, an evolutionary process –an integral function of the universe.”

Language made you believe you were a noun; the pantheist notion of soul fixes that.

The function that we could call the pantheist soul, then, is simply Truth, abundant and belonging to all, reminding us of what we are when we are lost in the limiting ego. Where a duality of body and soul –or negation of soul, leaving the duality of self and other unchecked–  leads to a sense of isolation, a non-duality of soul gives us both the Buddhist sense of interbeing (the “Oneness with everything” experience) and the opportunity to practice compassionate love for all from a unique perspective of soul. What more natural way could there be to put pantheism into practice, or follow the New Commandment: “That ye love one another; as I have loved you, that ye also love one another.” (John 13:34)

To tell people that they have no soul, while not untrue in the vernacular sense, is thus misleading, or at least squanders a great opportunity to connect a specious theistic idea with a life-enhancing truth to which we can all relate, because it is a real experience we all have that brings us closer to God (aka Reality as an interconnected web of Being) in our fragmentary thoughts. As a pantheist, I don’t have a soul, but soul definitely has me.